The Song of Wandering Aengus 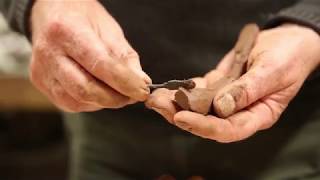 This collaborative piece is made using bronze that has been patinated with different hues to add form and depth. The main sculpture is of a Glimmering Girl She is is walking backwards, stepping on the rocks in the stream, as she retreats into the shade of the hazel wood. She is lifting her dress to avoid it catching in the undergrowth. The end of the dress trails into the water…..the dress turns golden where it enters the water. There is a golden apple in the palm of her hand. She is blowing a kiss at the apple.

Steve Wickham is a fiddler and has spent a lot of his musical life playing with the Waterboys. He moved to Sligo in the early 90s following the trail of many artists and musicians who were moving west at the time. He and his and wife Heidi (an artist) set up home in Calry where they live on a couple of acres.

Steve has been recognised as Ireland’s premier rock fiddler since the mid-1980s. His virtuoso playing has graced The Waterboys’ sound for many years, and he features on their classic albums This Is The Sea and Fisherman’s Blues.  Steve has also recorded and performed with U2, Elvis Costello, Sinead O’Connor, Bob Dylan, R.E.M. Sharon Shannon and many other artists in the worlds of rock and traditional folk music.

An electric violinist, songwriter and composer  he is an award winning Irish artist. Steve made his recording debut with U2 on “Sunday Bloody Sunday’ in 1982. He is a member of The Waterboys with whom he has toured the world, playing on some of its great stages.

Wickham is also accomplished with the mandolin, tin whistle, concertina, saxophone, piano, guitar and bones. He identifies Lou Reed, Van Morrison, Toni Marcus, and Mozart as musical influences, amongst others, and Mick Ronson. He is described by Mike Scott as “the world’s greatest rock fiddle player”and by New Musical Express as a “fiddling legend”.

About the artist, Eamonn Ceannt

Eamonn Ceannt works exclusively in bronze. His sculptures are tactile with a strong commitment to form and the juxtaposition of soft curves, planes and detailing, inviting the viewer to feel and touch their smooth surfaces.

His figurative pieces are lyrical with an emphasis on the expression of movement. He draws inspiration from the dynamic form of dancers and performers. The ballet poses are controlled, the limbs are lanquid, the clothes subtly demonstrating and emphasising the movement.

Eamonn’s work demonstrates a serious and sensuous engagement with the material from which they are crafted. He particularly enjoys the physicality of sculpture and the time-worn craft of bronze casting. Eamonn uses the ‘lost-wax’ (cire-perdue) method of casting working in close collaboration with the Bronze Art foundry.

Eamonn is the Chairperson of The Museum of Literature Ireland (MoLI) and a Trustee of the Alfred Beit Foundation (Russborough) and the Chester Beatty Library.